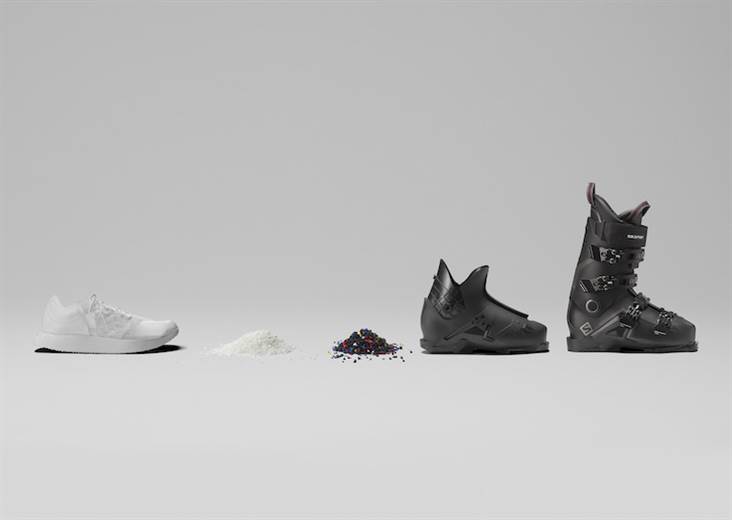 Sports brand Salomon has released details of a sustainability initiative it has called Play Minded Program.

One idea to have come out of  this already is  the concept  for  a  running  shoe  that  can be  recycled into the shell of  a  ski   boot. This is the result  of 18 months’ research and development, the company said.

Brand president, Jean-Marc Pambet, said Salomon has always prided itself on having “a uniquely close relationship” with local sports communities. He  added: “Today’s outdoor sports participants expect us to make a positive impact on the world.”

The company has pledged to reduce its overall carbon emissions by 30% by the year 2030. Salomon will also eliminate perfluorinated compounds (PFCs) across all equipment categories by 2023. There will be no PFCs in Salomon footwear by the autumn of 2020, in gear by 2022 and in winter sports equipment and apparel by 2023.

By 2025, it has said, 70% of the waste created by Salomon’s operations will be recycled or re-used and the environmental performance of every Salomon product will be visible to the consumer.

The new recyclable concept shoe was developed at the company’s Annecy Design Centre in the French Alps. It is made of thermoplastic polyurethane (TPU), which can be ground down at the end of its life, then combined with original material and used to construct an alpine ski boot shell.

Though it is a concept at this point, Salomon has said the shoe offers a glimpse into how may be able “to tackle circular economy principles in the future across various product categories inside the brand”. The company’s footwear team is now working to implement elements of this concept in running footwear that will be available in 2021.

“We recognise that we have to do better for the environment by creating footwear that drastically reduces its impact on the planet,” said the company’s vice-president for footwear, Guillaume Meyzenq. “By creating this concept shoe that can be recycled into a ski boot shell, we are showing that it is possible to find alternative materials to create performance footwear. It’s an exciting development that will help lead us to more sustainable footwear solutions in the future.”